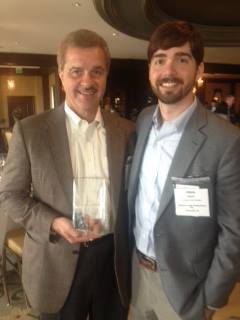 Alexandria, Va. (April 21, 2015) — National Trade Productions, Inc. (NTP), the leader in the face-to-face events industry, announced today that NTP chairman and CEO, Robert E. Harar, was honored last week at the SISO 2015 CEO Summit with the Robert L. Krakoff SISO Leadership Award. Established by the Society of Independent Show Organizers (SISO) — and commemorating Robert L. Krakoff, one of the industry’s greatest icons and proponents — the award is presented annually and recognizes an individual who has made outstanding contributions to the face-to-face events industry throughout his/her career.

“The Robert L. Krakoff SISO Leadership Award applauds experience, ethics, advocacy, vision, drive and excellence,” said Lew Shomer, SISO Executive Director. “With nearly 40 years in the business, Bob has consistently embodied these traits — and more — while building a legacy of success launching, producing and managing proprietary events, as well as trade shows for clients across diverse market segments. His entrepreneurial spirit and commitment to innovation have propelled him to the pinnacle of success within our industry.”

Lew went on to say, “Bob joins a who’s who of the industry including past award winners John Mooney, Nancy Hasselback, Ned Krause, and last year’s winner, Sheldon Adelson. We are so happy to recognize Bob’s contribution to the industry and his continued support of SISO.”

Robert E. Harar founded NTP in 1976 with the goal of becoming the premier tradeshow, conference, association meeting and corporate events producer. It continues today as a family-owned and operated business. Under Bob’s leadership, NTP has successfully produced more than 1,200 events in multiple countries. The success of NTP can be attributed to Bob’s entrepreneurial drive and vision. He is a “big picture” thinker and has a personal dedication to maximizing organizational efficiency and empowering others for success. Over the years he has recruited and mentored some of the top professionals in the industry.

Recognized as a visionary leader and driving force for change within the industry, Bob has served as Chair of SISO, a member of the CEIR Board making a significant financial contribution towards its success, and is a key partner to the International Association of Exhibitions and Events (IAEE). Bob has also been recognized as one of the “100 Most Influential Individuals in the Tradeshow Industry.”

For nearly 40 years, National Trade Productions (NTP) has produced trade shows, meetings and conventions that build communities and create powerful connections throughout the world.  Leveraging a legacy of success in sales, marketing and event management, NTP’s face-to-face experiences enable the prosperity and profitability of its clients and the industries they serve. www.ntpshow.com