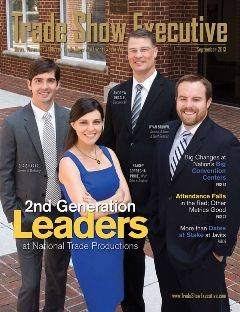 ALEXANDRIA, VA (September 16, 2013) — National Trade Productions, Inc. (NTP), the leader in the face-to-face events industry, today announced that four members of its executive team are featured this month on the cover of Trade Show Executive magazine. The article, which focuses on second generation leaders in the tradeshow industry, offers an insightful interview and profiles on each individual.

Andrew Ortale is NTP’s Executive Vice President and the son of Greg Ortale, who is President & CEO of the Houston Convention & Visitors Bureau and also current Chairman of CEIR, the Center for Exhibition Industry Research.

Stacey Correcha-Price is NTP’s Vice President of Sales & Services and is the daughter of Jeff Price, the former CEO of Experient, COO of Freeman, and a past Chairman of the International Association of Exhibitions & Events (IAEE).

Ryan Brown, CEM, is NTP’s Director of Sales & Event Services and the son of Chris Brown, Executive Vice President of Conventions & Business Operations at the National Association of Broadcasters and a past Chairman of IAEE and CEIR.

Chris Harar is NTP’s Director of Marketing and the son of Bob Harar, Chairman and Founder of NTP and a former Chairman of the Society of Independent Show Organizers.

“NTP prides itself on hiring the best and brightest from across the industry,” said Robert E. Harar, Chairman and CEO, National Trade Productions. “Andy, Stacey, Ryan, and Chris are tremendous talents that help drive our company’s success on a daily basis. Their commitment, insights and innovation continue to enhance our event strategies and elevate client results. I am thrilled that Trade Show Executive chose to recognize them and their accomplishments in such a prominent way.”

About National Trade Productions, Inc. (NTP)
For more than 35 years, National Trade Productions (NTP) has produced trade shows, meetings and conventions that build communities and create powerful connections throughout the world. Leveraging a legacy of success in sales, marketing and event management, NTP’s face-to-face experiences enable the prosperity and profitability of its clients and the industries they serve.